update: I stopped development on this project, for a few reasons:

The handset unit fits in a Nintendo Nunchuck. Assembly is straightforward, but involves a dremel and a lot of relatively fine soldering. Nunchucks cost $10, and the remaining components are about $30-50 in small quantity: LiPo battery ($5ish), radio ($2-5), mcu ($10-20), BMS ($5-10), LED & discrete components (<$1). They take about 1-2h to build. Performance is as good as or better than the Nyko wireless unit. I ultimately made functional prototypes with the NRF24L01 chipset (inexpensive and easy to program) and a 433/915MHz radio (harder to find and program, but better range).

The receiver end is much simpler. It's about as big as wiiceiver, costs about the same ($20 + radio), and is about the same difficulty to produce -- 20-60 minutes of assembly and soldering.

Functionality: as a 2-axis remote it works great, but one of the target applications was for a surfboard. 2.4GHz doesn't penetrate water well at all, so I went to 413/933MHz radios. They work, but still not great through water.

Flexibility: Libraries for the NRF24L01 and 433 / 915MHz radios are *significantly* different. Enough that it's not practical to use one software stack for both.

Based on the combination of the above factors (it's expensive, hard to make, and can't easily support cheap/plentiful radios) I've stopped development. It was a cool project though!

Wiiceiver has been awesome -- it lets people use an inexpensive wireless nunchuck + standard ESC to drive their skateboard. But the internet is running out of nunchucks, and there are some features still missing.

Wiiceiver X is a two-module system, controller ("Chuck") + receiver ("Board"):

Mommy's golfcart doesn't have a usable fuel gauge (battery level meter), or a clock. I have fixed that. 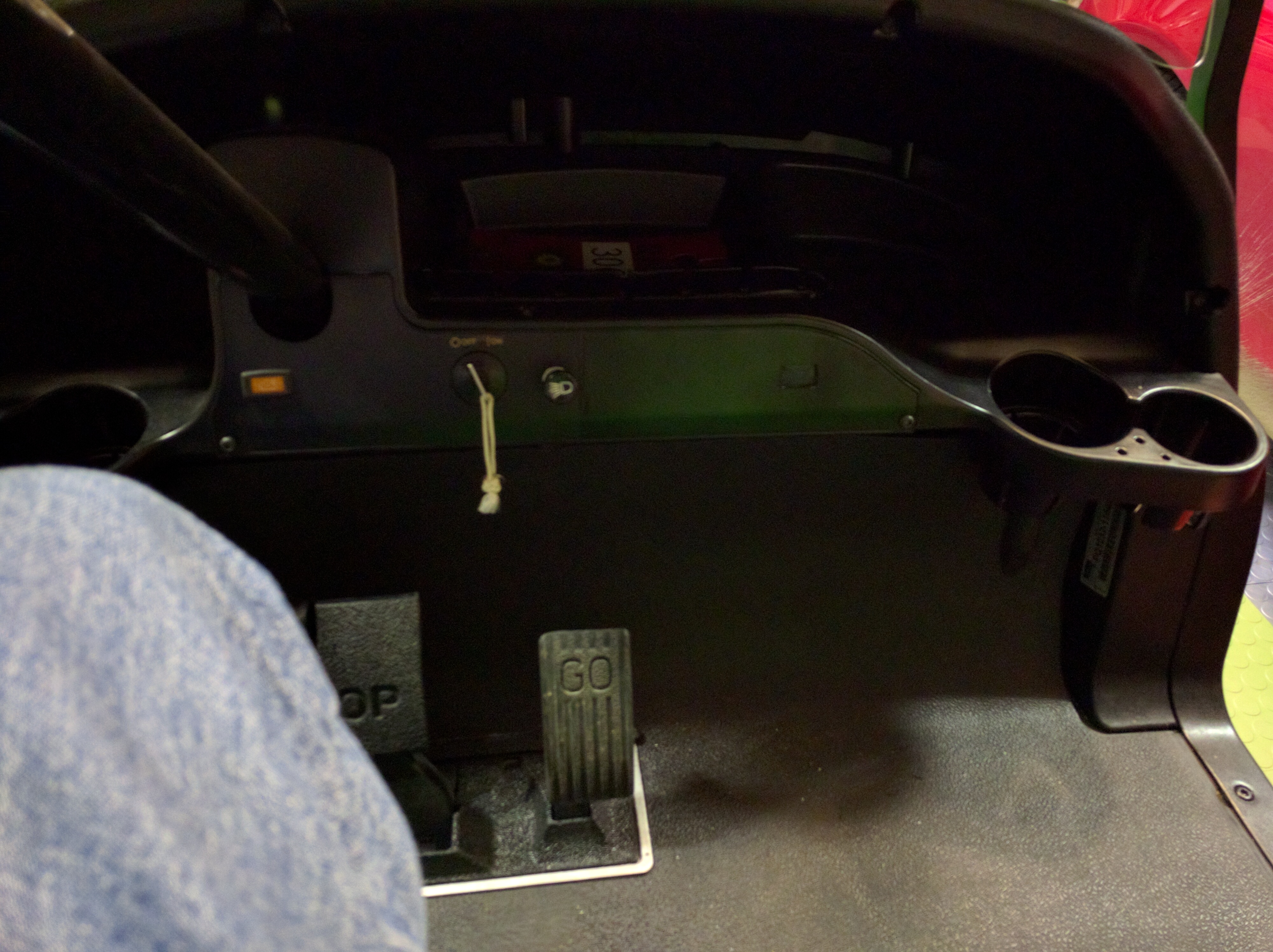 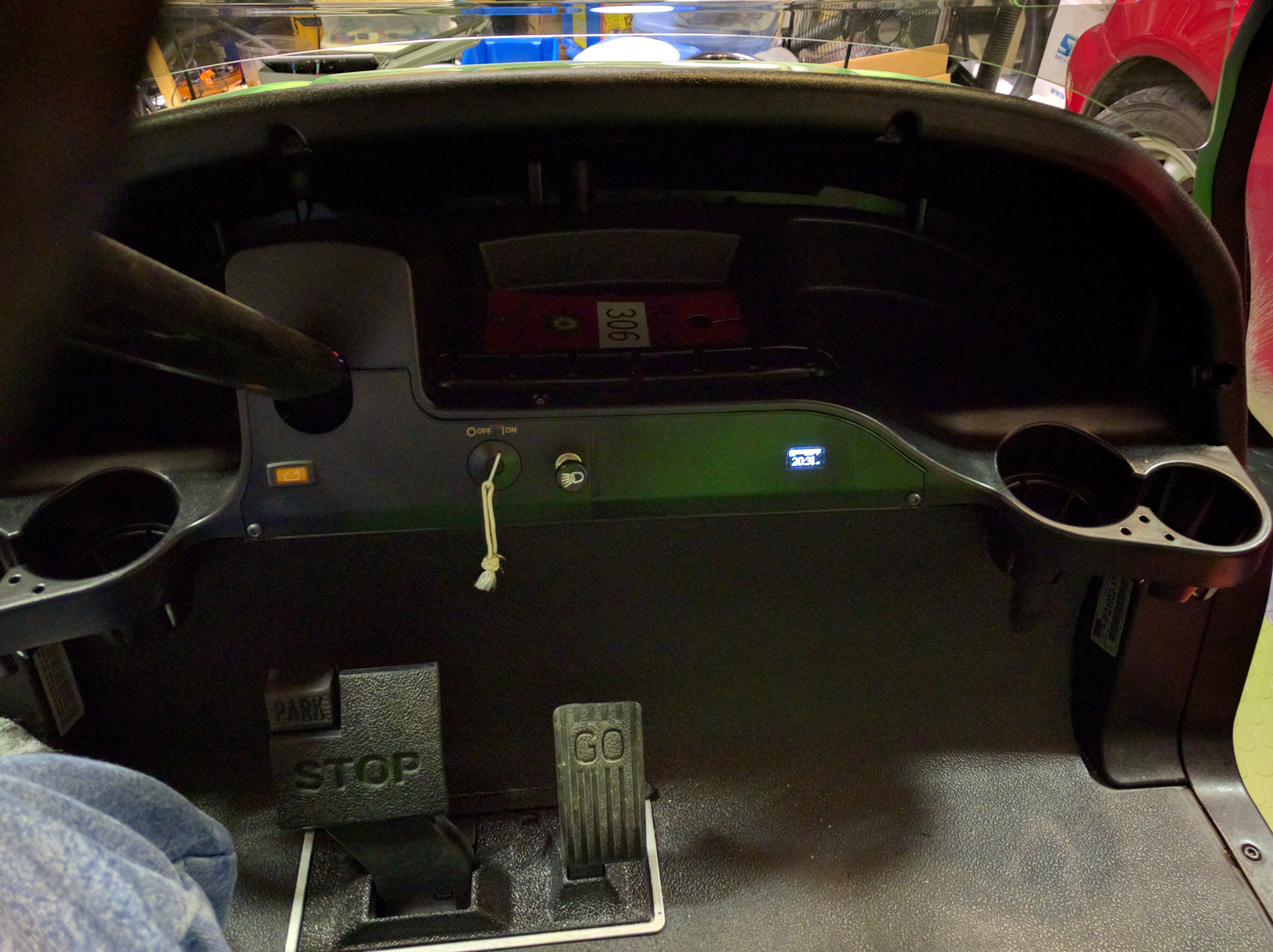 I slapped an Adafruit OLED (same as on my skateboard) onto a Particle Photon. I used a simple voltage divider to split the ~56v battery string down to something measurable, and a 48V relay to turn on/off a lower-voltage (~18V) line to power the voltage regulator.

The Photon awesomely has a very simple battery backup connection (so there's a lithium battery in there too), and the clock awesomely syncs up whenever it finds the cloud. 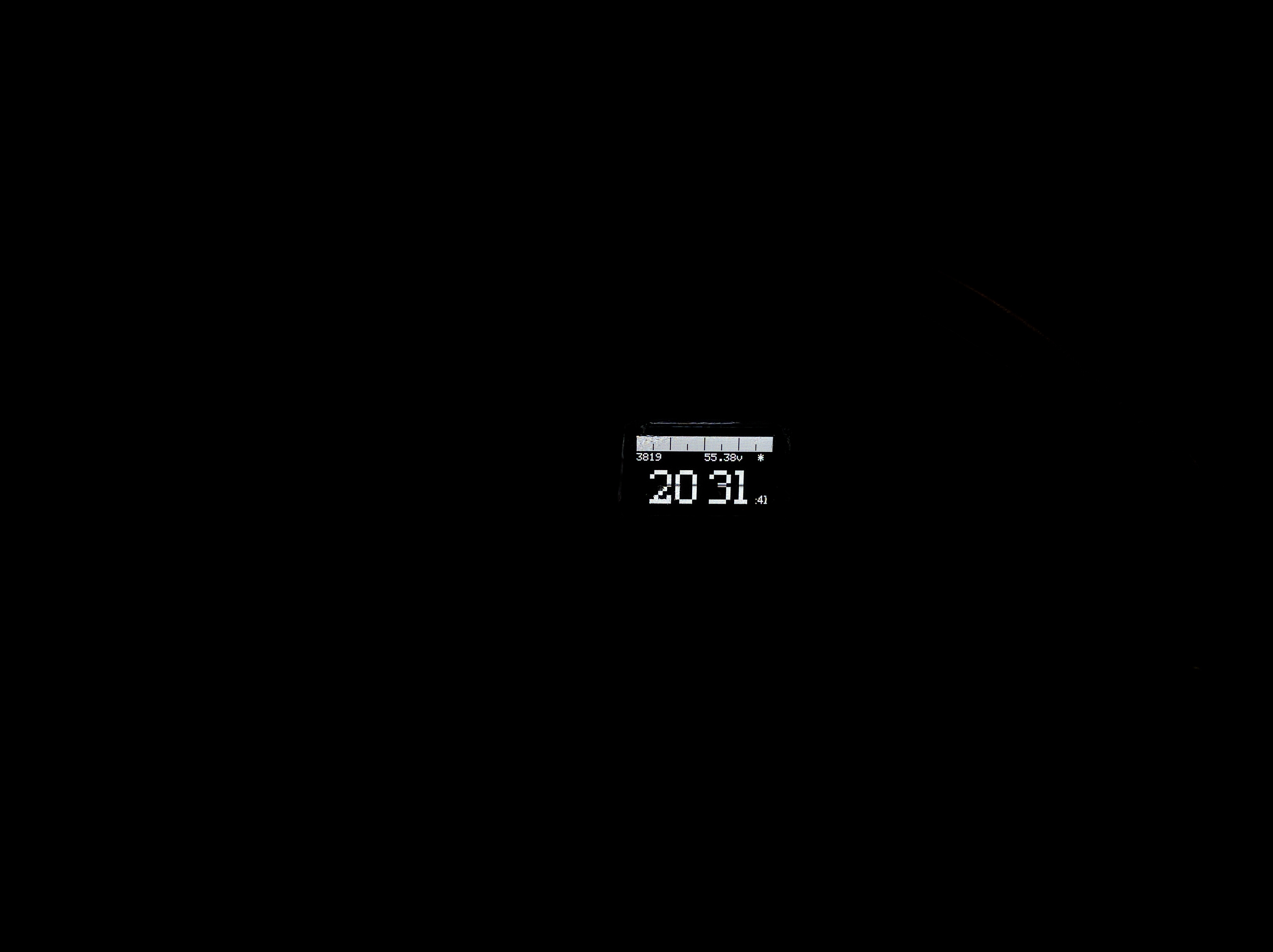 The display currently shows a fuel gauge bar, under that it has raw ADC value (debugging), a calculated voltage level, and a symbol showing the device's state of connectivity -- z (sleeping), + (connecting), * (connected). The device doesn't like being disconnected generally, so I detect that state and disconnect manually. It will reconnect on power-up, or if it senses the cart being charged (e.g. in my garage).

The clock display uses the built-in font, has a blinking cursor (currently "off"), and a smaller seconds display (also for debugging).

The code is a little silly, but please This email address is being protected from spambots. You need JavaScript enabled to view it. if you want to try and make one, I'll hook you up. 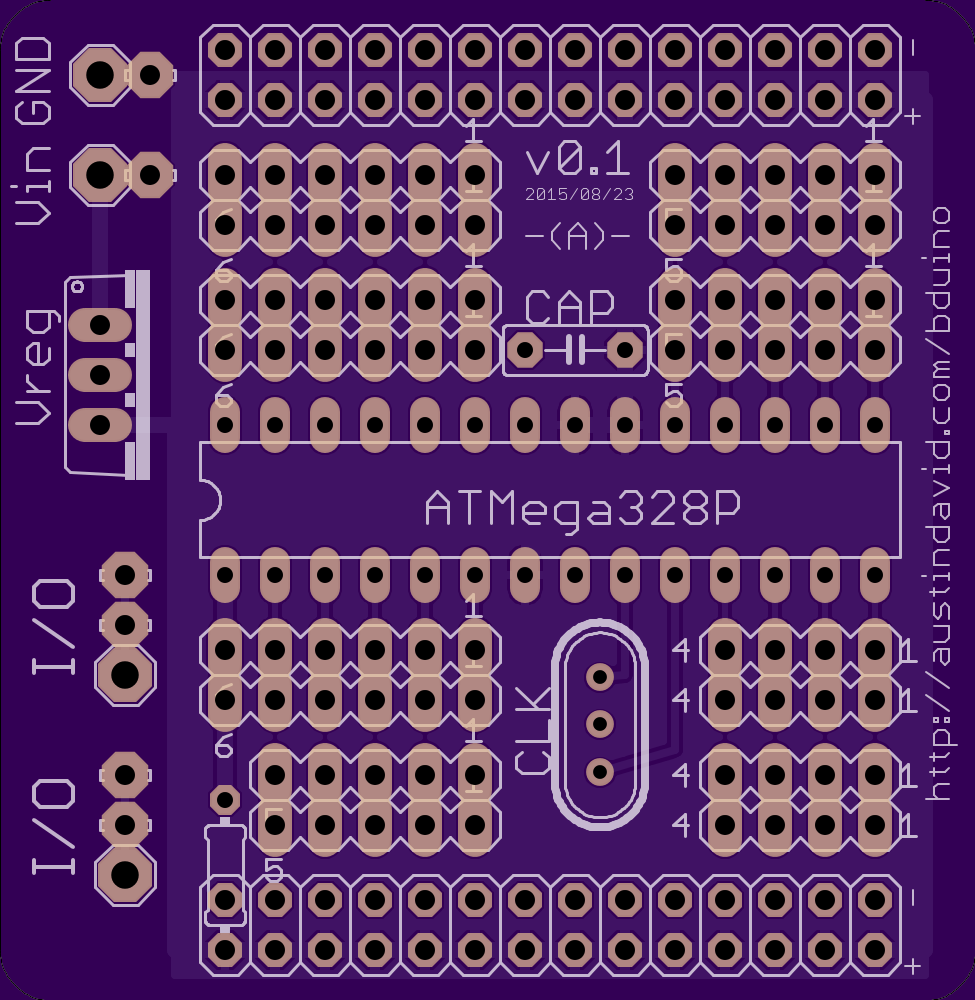 A new hardware project: Crazy Volts. Drew and I are working on a fuel gauge for his Crazy Cart. It's based on the ATmega328P + Adafruit's OLED display, and a custom PCB to hold it all together. 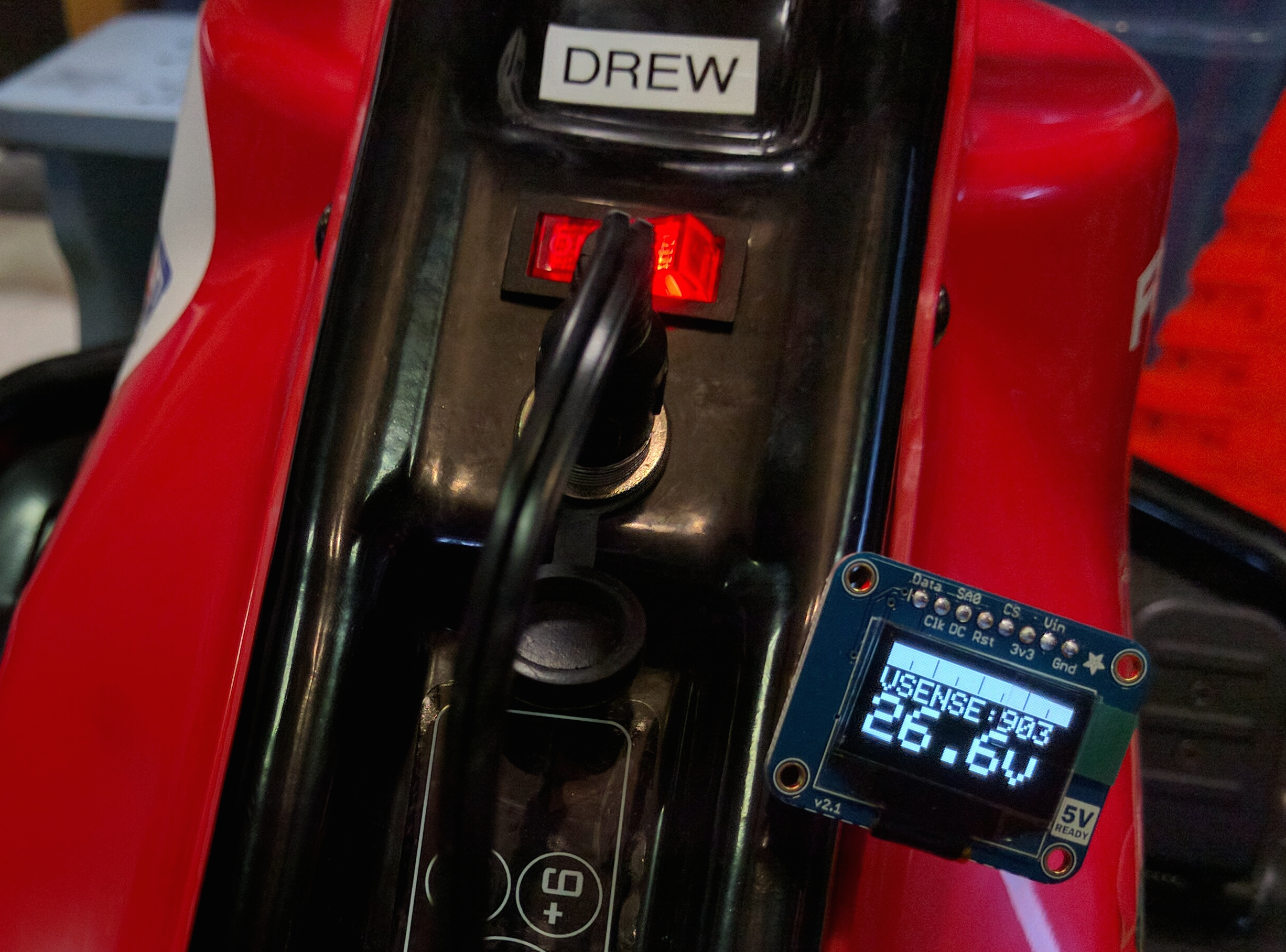 The power switch for the cart has 3 leads: ground, battery, and switched to controller. The controller lead is switched and provides the voltage sense, so we just wired the input + power leads together. The display running in the pic above shows our calibration test, and the display itself hasn't been permanently mounted yet.

The design is general enough to be adapted to anything with batteries. In software we'll probably only try to estimate the power characteristics of SLA, but it's just software.... 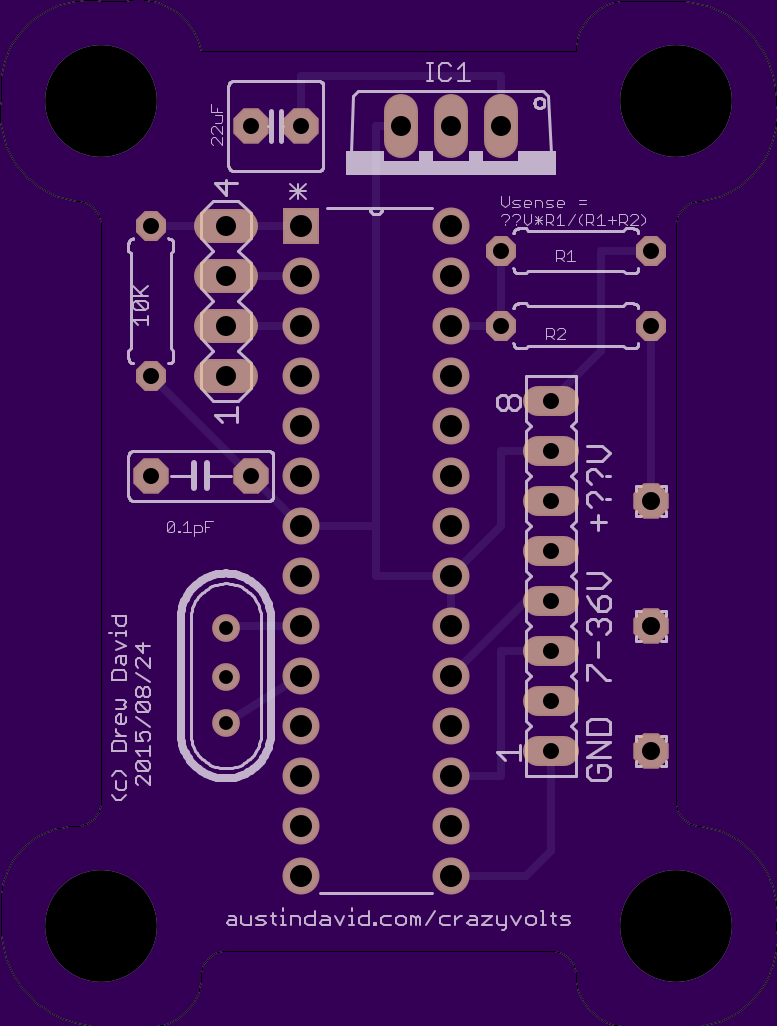 We also considered using a general-purpose ATmega328 breakout (the bduino), or a teensy 3.1 + adapter board to wire up a regulator + OLED display.

I am out of kits and will not restock Wiiceiver due to the lack of good wireless nunchucks available. I am working on Wiiceiver X, a replacement wireless handheld controller & receiver, and can hopefully release specs & instructions in the Spring.

I am also out of "upgrade" kits, but you can also download the latest software and upgrade your own device at your convenience.

Introducing the wiiceiver! A drop-in "plug and play" replacement for a traditional RC receiver, designed for use on an electric skateboard. It has 2 standard 3-pin servo connectors (single ESC, dual ESC, or ESC + BEC) and a port for a Nintendo Wii Nunchuck.

... unfortunately all kits are sold out.

I have been asked to deliver a low-voltage disconnect circuit for potential future production. It would drive a 15w load and protect a 12v sealed lead-acid (SLA) battery.